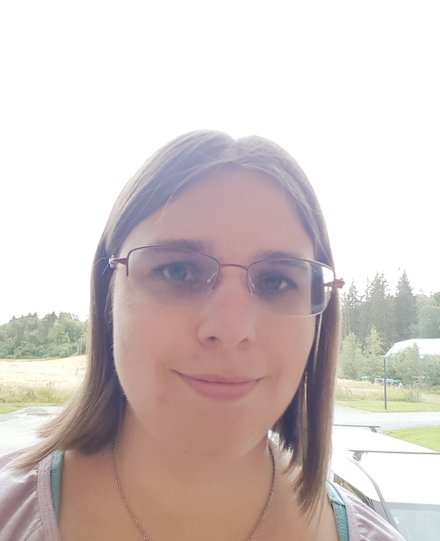 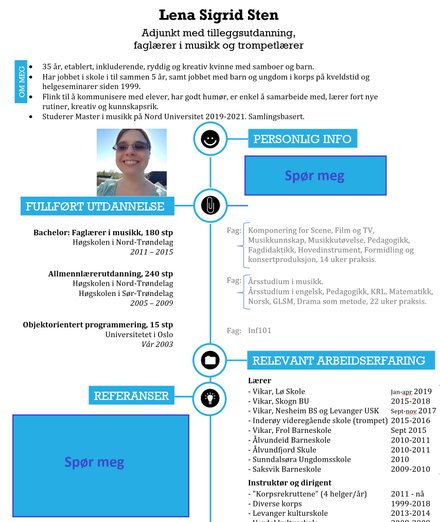 She has settled down at Skogn in Levanger, with her boyfriend and a daughter born in 2013. Her Norwegian dialect is a joy to experience, everything is represented here! Her English pronunciation is a bit on the American side - without any clear referance to specific dialects.

A creative lady who keeps herself busy and wished to make a side income into a main income.

Lena started playing the cornet in 1993, played trumpet in His Majesty the King's Guard's Marching Band in 2003/2004, and has been an instructor/conductor for young musicians in school wind orchestras since 1999. She is most comfortable playing in a big band and is currently playing the first/second trumpet in Levanger Storband.

Occasionally, she is contacted for small projects like playing short fanfares at different arrangements.

Lena completed her teacher's education in 2009, as well as a bachelor degree in music teaching in 2015. In 2022, she became one of Norway's first Suzuki certified teachers for trumpet.

She uses her extensive education while instructing and includes creative teaching methods and pedagogical tricks in her classrooms.

Her principles are creating inner motivation through adaption, safe environment, joy of playing and achievable goals.

As Lena has a pedagogical education and 20+ years of experience as an instructor, she has an enormous skill in how to adapt music for children who have played for 1-3 years. Her arrangements include recognizable melodies with easy to read notation, vast intrumental knowledge and melodies that sound right for the musicians. She also tries to activate the entire body, which means the musicians and conductor will occasionally dance and sing too. Lena has arranged several pieces for beginners, though they are not available for sale just yet.

Lena is for now relatively inexperienced as a professional translator, but both speak and write fluently English. She is available for small projects at competative prices.

As if the music wasn't enough, Lena has developed an interest in sewing clothes. It started with clothing for her daughter, which has proven to be very rewarding in making small items like head bands, buffs and the occasional dress.

Head bands and buffs take approximately an hour to make, whereas a dress can take several evenings to finish. She's using a regular sewing maching and an overlock machine, to help make the seams look more professional